Of Horn Loudspeakers and Single-Ended amplifiers

Unlike sealed-box loudspeakers, where behaviour can be modelled accurately within a computer programme, and bass-reflex types, which can be closely approximated, no such treatment is available for horn loading. Indeed, their behaviour has still to be completely analysed, while their interactions with the listening room present a further formidable set of variables. As a result we must return to our primary method of design and evaluation – listening. 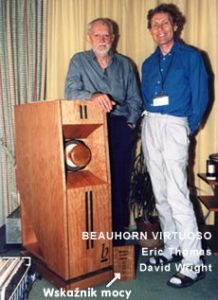 It is a fact that conventional measuring techniques show horns to be weak in just those areas at which most manufacturers push hardest, i.e., the extremes of frequency, high and low. However, we do not live our lives at these limits, rather, it is in the mid-range where most of our hearing is done and the higher sensitivity of our ears to these mid-frequencies reflects this. For the same reason, we are most sensitive to distortion in this region.

Even their worst critics agree that it is the mid-band of horns which comes across most strongly, although their usual descriptive term “nasal” implies undue prominence or high levels or distortion in this critical area. How can this be, when Paul Voigt showed that horn-loading offers lower distortion than other methods?

The answer is surprisingly straightforward: most “horns” are only horn- loaded in the bass! The addition of a mid range horn on the front of the cabinet as employed in the Beauhorn Virtuoso speakers (not to mention a degree of horn loading given to the tweeter cone by the large phase plug) removes most of this distortion, levels the response and cures the infamous honk!

Now that the speakers are freed from this mid-range mire, they are able to demonstrate their real strength: their astonishing clarity. Light weight paper cones, high flux magnets and ultra-high sensitivity allow them to respond to signal changes much faster than many conventional units. They are able to reproduce the tiniest level changes – the so-called micro- dynamics – that carry the ambience and the “air” around the performers; that convey the atmosphere of a performance. They turn a series of electrical oscillations not just into a succession of sounds, but into real music.

Of course, to reproduce this music they require a sympathetic input.

It’s been suggested that since our hearing is (mostly) provided by our eardrums being pushed inwards, then pulled outwards by alternately high and low pressure air, then a push/pull amplifier is doing nothing unnatural. Would that it were so!

Is it realistic to assume that we can take a signal, construct the inverse, amplify both parts and then combine them without some sonic detriment? In fact, a typical class B push/pull amplifier produces proportionately more distortion at very low outputs than at greater levels, yet it is precisely these very low levels which are so vital for the reproduction of real music, and which make the Albert Hall distinguishable from the Barbican. Without the ability to reproduce the finest details, can any equipment claim high-fidelity?

Single ended amplifiers, however, produce distortion more-or-less proportional to their output level, so that when reproducing the quietest sounds they are actually operating in their most linear region. When asked to do more, their distortion spectrum is at least musically related, unlike the series of odd-harmonic distortions (albeit at a lower level) produced by their push/pull counterparts. In short, their distortion differs in quality as well as quantity.

The two types of amplifier can sound very different, and rarely do the single-ended variety sound “normal” to us because we constantly listen to the other, not just in hi-fis, but in TVs and radios also. Sometimes we make an accommodation with this type of sound, and come to prefer it. We expect the sound to grab our attention and we experience a sensory pleasure in the loudness/imaging/bass extension/whatever akin to tasting a fine wine or smelling a favourite dish. The only description applicable to single-ended equipment, however, is “coherent” and owners are much more likely to be discussing and comparing musical performances. The medium is most definitely not the message.

Ours is an age of efficiency and no-one could accuse single-ended amplifiers of saving energy; they are grossly inefficient and therefore
difficult to build in the powerful versions that so many consumers believe are required. Of course, if they insist on using 1% – or even 0.1% – efficient speakers they are quite right, but with a 10% (or more) efficient horn even that problem disappears.

With the introduction of negative feedback some 60 years ago, output impedances were reduced, distortion was minimised and amplifiers changed. No longer could they transmit the excitement and the raw energy of real live music. Is it any coincidence that many collectors believe the heyday for performer, performance and recording – particularly of overtly emotional music like the Blues and Jazz – to have been pre-war?

Music is about emotion, but to maintain this while avoiding unpleasant and soul-less side effects we must use the most linear amplifying device ever developed – the triode valve.

Regrettably, with our insistence on zero negative feedback, even triode amplifiers can have output impedances of several ohms and the pundits – usually those with an alternative product to sell – claim that they cannot hold onto the loudspeaker cone as effectively as more powerful types with high levels of feedback. Can this be correct?

Of course, what they should say is that the amplifier cannot grip a crossover so effectively, since this represents a complex load of inductors and capacitors. Speakers with a single drive unit cause far fewer problems – but the best is yet to come!

When a moving-coil drive unit is placed in a horn enclosure the damping effect of the air on the cone is much greater, because the horn is acting as an acoustic transformer. Thus, the normal mechanical resonances between the mass of the cone, the enclosed air and the elasticity of the surround are suppressed and the output impedance of the amplifier becomes almost irrelevant!

The only objection left to critics is the intuitive belief that a powerful amplifier can somehow accelerate the cone more easily than a low powered type. A few moments’ consideration shows up this fallacy, for although they can produce a higher output voltage this will only give rise to louder sound, as the cone moves further; they cannot move the cone any faster. The acceleration is determined by the the mass of the cone and the flux density of the speaker’s magnet – and lower masses and higher fluxes than those used in the specialised drive-units of horn loudspeakers are rare indeed.

We are left with the freedom to partner very natural sounding amplifiers with ultra clear and detailed loudspeakers. The strengths of one exactly complement those of the other.

Is this synergy, or what?