A chat about Lowther drivers

We had an interesting telephone conversation recently with a gentleman in Hong Kong. Basically, he wanted to know why we had chosen to use the Lowther 'C' range (ceramic magnets) drivers in our Virtuosos, rather than the 'A' range (Alnico magnets). It was his opinion that the Alnico units sounded sweeter and more musical, had we done it to keep the cost down? 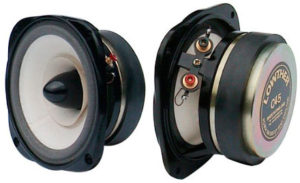 There's an interesting answer to this query. Our very first design, which we never brought to the market place, used a ceramic magnet PM6C driver and was fully horn loaded. That is, the rear of the cone drove the bass horn and the front drove a mid-range/treble horn. It had several shortcomings, but sounded sweet enough in the treble. Our next design, the Brio, like nearly every other Lowther based design you'll see, had the driver radiating directly from the front face of the cabinet.

We became aware of the characteristic treble stridency of these drivers. Using the 'A' range drivers certainly mitigated this and made the performance much more palatable, but it didn't completely resolve the problem. Under these circumstances the extra cost of the Alnico units was certainly worthwhile, and our Accelerando used PM2As. But we felt that the real answer was to return to using a mid-range horn in conjunction with a larger-than-standard phase plug.

This gave us a sensibly flat response (3dB, 50/16k Hz), resolving the problems of the aggressive treble and the famous Lowther 'shout'. It also meant that we could hear little difference between the 'C' and 'A' range units. There was no reason to use the much larger Alnico drivers, and so we could take advantage of the smaller size of the ceramic drivers.

Our Virtuoso Gold speakers, employing PM2C drivers, were the best we had heard, up to that time, and they received enthusiastic reviews. Lowther then introduced the DX range using neodymium (rare earth) magnets. This material can achieve flux densities which were undreamt of before and hence the magnet assemblies are much smaller and lighter than anything previously available. At the same time, they give a quantum shift in resolution.

In practical terms, this means a huge increase in transparency and delicacy which can reveal the very sublest nuances of a musical performance, given the benefit of full horn loading, of course. A further advantage of using the smaller, lighter drivers, which we touched on in this conversation, is that they are much more compact and robust and therefore are unlikely to suffer damage in transit, given normal handling. The much larger Alnico magnets, hanging off the back of the alloy frame, on the other hand, needed more careful handling - which they didn't always receive.